I posted The Grease Arrestor’s, What Was, Is on last year, and I still think that it’s a gloriously fuckin´ sounding piece of audio eclectic, and surely to some wise among you will recall the debut offering from this five aussie piece and last you, so you will rejoice upon seeing their sophomore effort on wearethelastbeatniks today. The vocals fly at you from all directions, defying your ears to focus on the blistering 60´s influenced psych that propels them through space where guitar/drums/tambourines/organ pours out from all directions swirls psychedelic over walls that fuse the best of VU and BJM.
They happily provide us free downloads through “name your price” mode on bandcamp. They deserves your support, so if you like what you hear, be sure to drop some dollars and while you’re at it, you should probably just go ahead and snag that What Was, Is … if you missed it last year.

The Grease Arrestor describe their second album, ‘Volume Two’ as a pastiche of different ideas and influences, including the 60s golden era and elements of 90s movements, blended with their signature drone and fuzz groove combination.

THIS IS FREE, FOR YOU… BUT THEY NEED YOUR HELP.
There is no financial label support for this band.
They appreciate any donations that will fund the band pressing this album to vinyl. 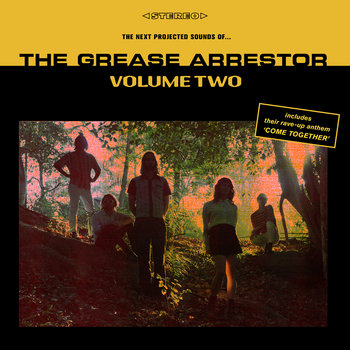 Recorded/Produced by The Grease Arrestor