the epitome of unpredictable…

Simply, Psychedelic rock that will send you to a trance… It is perhaps strange for me to try to wrap a context around a band that I never had heard until last week , a band that I didn’t actually heard until read Damo Suzuki name on their bandcamp. A stunning collection of sounds from this Ottawa outfit, The Band Whose Name Is A Symbol is like absolute perfection in this increasingly profuse sea of retro sounding psych. Seriously, fuck a bunch of psychrock points, OK? I mean, with equal parts early Floyd, Hawkind , CAN and LSD, TBWNIS cranked out an impressive vinyl-ography of eight releases which, at least for those I heard, could just as easily be rehearsal recordings from some burnout hippies as the product of a small gathering of forward thinking cosmic/psych art . So if you’ve been experiencing a serious psych-cosmic-retro-rock deficiency lately ( was my fault obviously), then I’m here to redeem myself.

Thanks to Ellie, Iggy, and the LCBO. 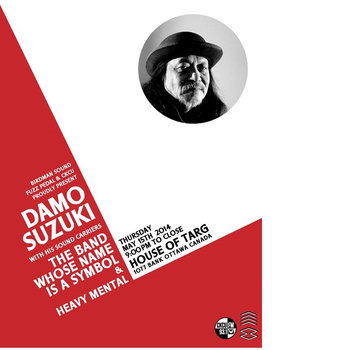 This was the third time Damo and TBWNIAS collaborated in as many years, thus making him the band’s de facto singer. He has yet to show up for a practice, though.

The device used in the making of the recording was damaged during the performance. If you are so inclined to pay for the recording, these contributions will go towards the rehabilitation of the tape deck. Enjoy.
credits
released 15 June 2014

original recording to Sony Walkman Pro/ 1 stereo Mic by Dave Reford live off the floor. Transferred to the digital domain by Bruce McEwan. And that’s that!

2 comments on “the epitome of unpredictable…”