As the night nears an end at Mars Arcade and Pub, Thee Holy Ghosts, the last act of the night, begin their sound check.

The floor is drenched in Pabst Blue Ribbon, the North Carolina outfit Paint Fumes just finished performing fast-paced punk, and some members of the audience retreat to the air hockey table.

The guitarist and lead vocalist of Thee Holy Ghosts, Ian, asks the audio engineer for a ton of reverb on his microphone – he wants his voice to drown in a sea of echo to the point that his voice is unintelligible.

The band finishes their quick sound check and what follows is a fury of punk, a sprinkle of doo-wop and surf-rock riffs. People dance, people mosh, people scream. The floor is drenched in beer – one girl had the misfortune of having her tall glass of ale knocked down by a very small man.

The music that is created by Thee Holy Ghosts is hard to pin down because it isn’t music that is confined to one genre. When I asked Ian to classify the music his band mates and he make, he simply responded, “Rock ‘n’ Roll.” And that seems to be the most appropriate answer.

Another influences Ian mentioned are The Ronettes, a ’60s R&B girl group from the sixties that focused on vocal harmonies.

One of the most interesting sources of influence on Thee Holy Ghosts is GG Allin. GG Allin was a punk musician that was infamous for his live shows that incorporated self-mutilation, excrements and sexual acts.

“I like his mentality behind the not giving a f**k and doing whatever you want,” Ian says. “I think people need to do that more often than give a f**k about what everyone thinks.”

The punk aesthetic is ever-present in one aspect of Thee Holy Ghosts’ music: their production. Even though it is getting more and more inexpensive to produce music digitally, Thee Holy Ghosts produce their music with the ancient technology that is an analog 4-track. “Digital sounds a little washed out,” Ian says. “Analog, it actually captures the whole sound of the instruments and all that junk. That’s why we do it. You can tell when something is recorded on tape or on a computer.”

The lyrics of Thee Holy Ghosts’ songs are a “spur of the moment” affair. “All our songs, we really don’t really have lyrics until we go into the recording process,” Ian says. “We kind of just write them as we go along with the recording thing.”

Thee Holy Ghosts didn’t necessarily pick Gainesville because of its music scene. “When I was eighteen, I got kicked out of my house and was living with my friend Matt and his sister that were going to school here,” Ian says. “He got kicked out of his house the same time I did, and we both moved up here because it was cheap.” According to Ian, the band members met through skateboarding. Ian met Matt and Eman in high school and Hector in Gainesville.

It seems that what keeps Thee Holy Ghosts here in Gainesville is economical constraints. “We don’t have money to move to a big city or anything like that,” Ian mentioned.

Ian expressed a bit of displeasure towards Gainesville: “Maybe more DIY venues… There’s like one place where we can actually book our own shows.” But at the end of the day, Thee Holy Ghosts are among the most promising bands here in Gainesville. 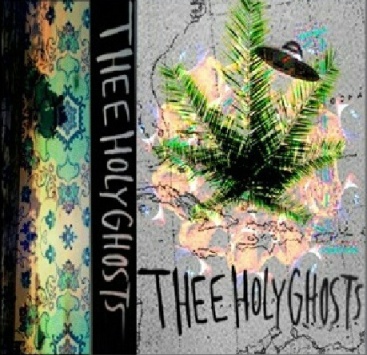 Only 3 tracks to download are  included with your purchase of “Thee Holy Ghosts Tour Tape”.when I   receive the tape I  go up the rest