Posted by pepearljam on 13 June, 2012
Posted in: magazine. Tagged: nme. Leave a comment 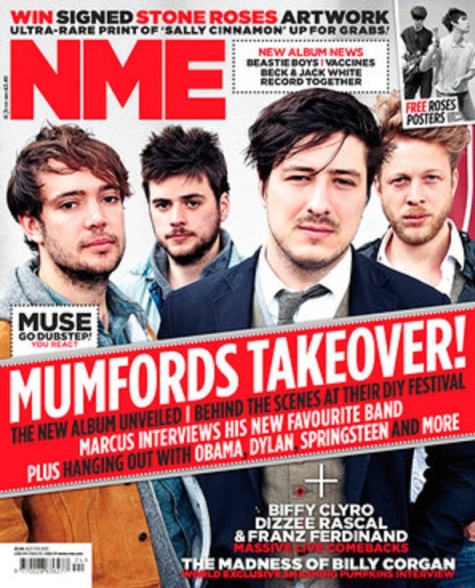 Mumfords Takeover – Inside This Week’s NME

How many times have you and your chums sat in a field in the early hours of themorning, rubbing your chins and thinking, “What if… we ran our own festival. What if… we could do whatever we wanted. What if… we don’t actually like Carling.” Course you have. And so have Mumford & Sons. But then, because certain doors open for you when you’re the biggest new band in the UK, they went ahead and created the Gentlemen Of The Road tour. So we joined them and their favourite bands for a stopover in Huddersfield, as Marcus and his mates unveiled all the details of their new album…

The Vaccines In The Studio

What can you expect from the new album? The work ethic of Elton John, the tunes of Bob Dylan and the Stone Roses…

The Scottish crazies treat their hardcore fans to a sweat-drenched show in… Swindon. Hooray!

Beck Is Also Back

Well duh! Check out the trailer for new album ‘The 2nd Law’, which features an angry-looking robot and a Skrillex-esque dubstep whooooomp.

The line-up that keeps on giving. Find out who’s been added…

He’s got a new Smashing Pumpkins, and he’s ready to conquer the world again. Still, obviously, off his rocker. And that’s why we love him!

They’ve made this summer’s hottest album. But how?

No one parties like these dudes, so we caught up with them in Toronto just in time to prepare ourselves for their live return in the UK

We get to grips with some lakeside espradilles by Penguin. Huge. HUGE.

All of them, on one page. Time to get your marks back…

NME.COM blogs contain the opinions of the individual writer and not necessarily those of NME magazine or NME.COM.