Emily, Jenny, Theresa and Stella have released The Fool DeLuxe

END_OF_DOCUMENT_TOKEN_TO_BE_REPLACED


Warpaint has carved out a spot in the Los Angeles music scene with a style that playfully courts dreamlike sequences of psychedelia, post-punk and funk. The all-female quartet has been around since 2004, and after releasing its debut EP, Exquisite Corpse, in 2008, the group became a local sensation.
After jumping to No. 1 on the Amoeba Reords local artist chart, Warpaint was picked up by Manimal Vinyl, who reissued the EP. Throughout 2009, the girls were picked up to tour the states with School of Seven Bells, Band of Horses, Yeasayer, The XX and Beach Fossils.
The strengths of the EP connects directly to the band’s debut LP, The Fool. The album contains streaks of experimental funk, punk and electro-pop instrumentals glazed in a thin, hazy wash of vocals.
After charting in the U.K. and U.S., Warpaint has embarked on a slew of appearances, including music festivals Lollapalooza, Coachella and the Glastonbury Festival. Hear the band play live and discuss its current tour, talk about growing up together in Oregon, and how California has had an influence on the band’s style.

Posted by pepearljam on 3 March, 2011
Posted in: Uncategorized. Tagged: Warpaint. Leave a comment 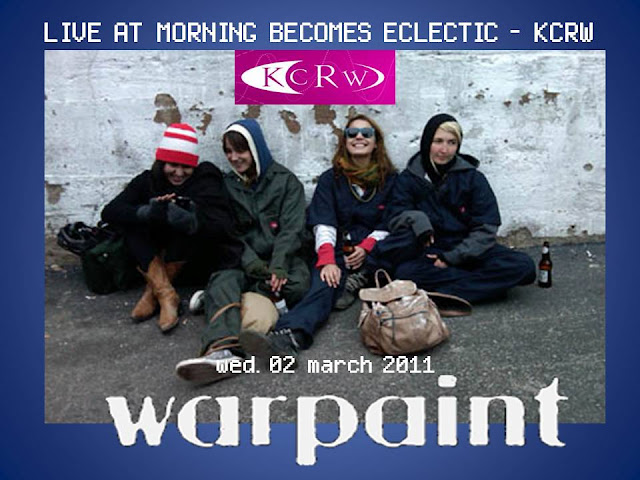 Warpaint
WED MARCH  02, 2011
Host:  Jason Bentley
Listen , Watch or Download entire show
The ladies who make up LA’s Warpaint have been getting a lot of attention and rave reviews for their music. KCRW DJ’s have been on the frontlines sharing those songs, and here can to hear and download  the performance and the interview at  Morning Becomes Eclectic.
As far as new material, they tell Jason they’ve only had time to write new songs while jamming at soundchecks but plan on settling into a studio eventually to work on a release for 2012.
Greetings… 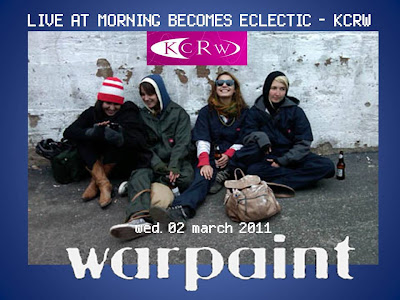 Posted by pepearljam on 12 November, 2010
Posted in: Uncategorized. Tagged: Warpaint. Leave a comment

Posted by pepearljam on 5 November, 2010
Posted in: Uncategorized. Tagged: Warpaint. Leave a comment