Not much should need to be said here, two of most magically breakneck and extremely creative Garage Rock brains do battle on this live Split total and complete mindfuck that is hopelessly addictive. First up is Ty , their attack is a relentless swarm of indulgence riffing, Rock invocation that would later morph into King Tuff 70´s hooks counter, with some excellent, mutant, garage noise flashback . Both kill, I am calling this one a draw, but the winner really is you the listener. This rules and the folks at Easy Sound Recording ‎ just recently had the good sense to pressing this as a beautiful vinyl release. They are everything we want in a psych garage rock paradise, mysterious, vibrating , and covered in a fuzzy aural soil. 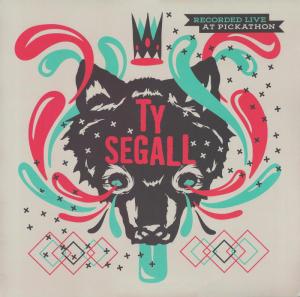 Culled from four incredible performances over the first weekend of August 2013. Wild, late nights with King Tuff and a very special debut of the Ty Segall Sleeper Band (recorded three weeks before the release of Sleeper).

The second release from the ‘Live at Pickathon’ series. A ‘vinyl-only / limited-pressing’ endeavor, which focuses on the festivals historically diverse lineups and intimate one-of-a-kind performances. Each release hand selected from the massive archive of more than 15 years of recordings; remixed, mastered and wrapped in original artwork featuring illustrations by Travis Bone of Furturtle.

is SOLD OUT.
What now? Well, you can still grab a copy since 5/4/2015 at your favorite record store