…the fire stay in the middle of you going round .

I feel I waited too long time to share this band here, cause Goat are like a unique favorite band. I seem l that this band stand out from all the rest. They live in their own world.
I’m listening to his recordings, I’ve deployed them in front of me like a white cloth waiting for my head to think of something to write, would be very refreshing if I can push to you able enjoy in full what I heard from them. I just love it.
On the other hand, I can not avoid warn about this rite and maybe you must settle with scurry away to the light.. Shit. When you hear Goat , you think you are a member of a lodge and take part in some rituals. Preferably somewhere underground.
Somewhere on which would expect for anything that can be found, something completly stranger, terrifying but also exciting. It’s like something that pull you by the hair to out the water and say .. “breathe a little retro psych magic ” , like a priest. And push down your head again looking to purify, to cleanse all your positions, like crying out for your redemption

And the torches extinguish. You wake up. Finally
….but the fire is stay in the middle of you going round .

And the torches extinguish, but the fire stay in the middle of you going round .
You wake up. Finally.

For those who are unaware, Goat are a collective of musicians who hail from a small and very remote village called Korpolombolo in deepest darkest Sweden.
Legend has it that for centuries, the inhabitants of the village of Korpolombolo were dedicated to the worship and practices of Voodoo. This strange and seemingly unlikely activity was apparently introduced into the area after a travelling witch doctor and a handful of her disciples were led to Korpolombolo by following a cipher hidden within their most sacred of ancient scriptures.
The reason it led them there is unknown, but their Voodoo influence quickly took hold over the whole village and so they made it their home – there, they were able to practice their craft unnoticed and unbothered for several centuries.
This was until their non-Christian ways were discovered by the Church
and they were burned out by the crusaders, the survivors cursing the village over their shoulders as they fled.
To this day, the now picturesque village of Korpolombolo is still haunted by this Voodoo curse; the power of the curse can be felt throughout the grooves of  Goat´s  recordings.
The band takes in many influences, from the Afro groove that is central to the album, through to head nodding psych, post-punk, turkish rock, kraut repetition and astral folk.

Goat  ‎– Run To Your Mama Remixes
Label:Rocket Recordings
Format:Vinyl, 12″, EP, Limited Edition, Orange
Country:UK
Released:20 Apr 2013
2013 Record Store Day release. Orange vinyl, limited to 200 copies.
The orange vinyl versions were made exclusively to give to the remixers involved and for the band themselves to sell at Roadburn and on their US tour.
Tracklist 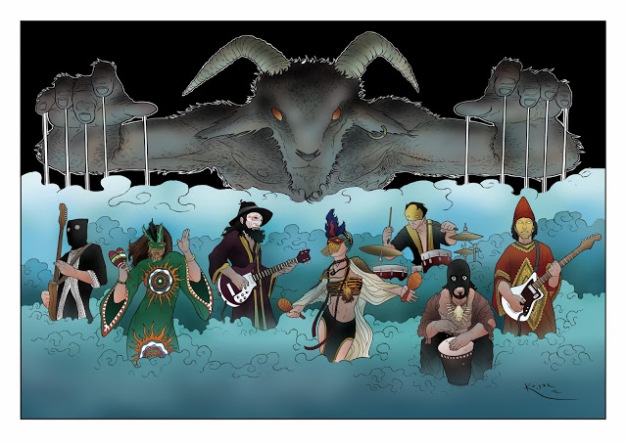 2 comments on “…the fire stay in the middle of you going round .”