Posted by pepearljam on 13 March, 2013
Posted in: magazine. Tagged: nme. Leave a comment 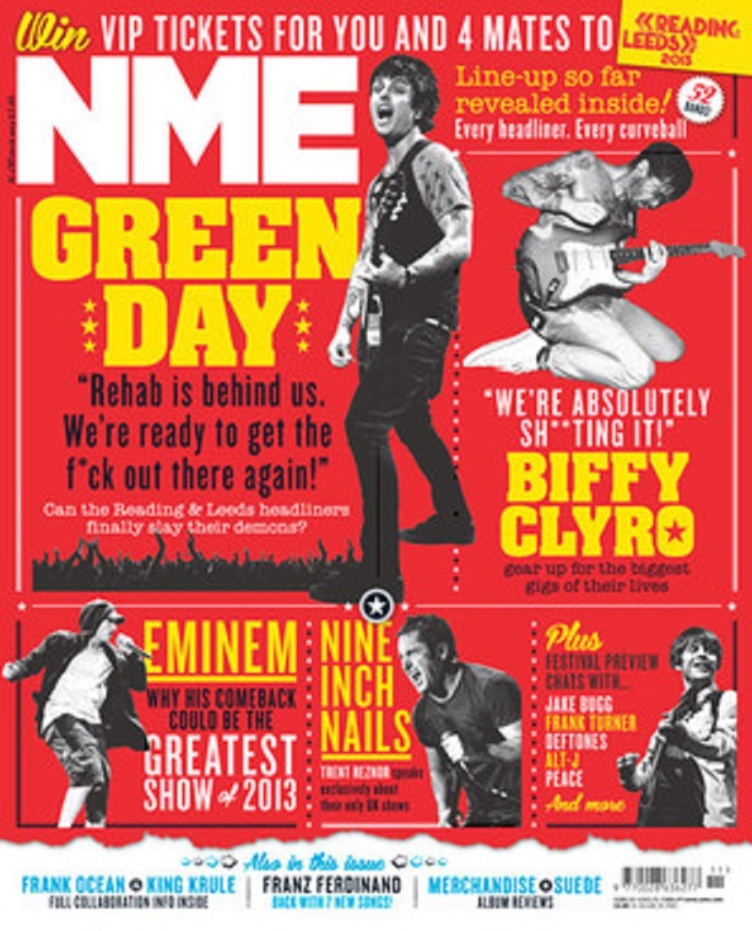 Green Day are the last headline act to be announced at this year’s Reading & Leeds festivals. NME speak to the band about whether they can finally put this past year behind them. Also inside, there are no less than 52 acts revealed in the line-up so far, Biffy Clyro talk about their fears for their headline slot, we ask whether Eminem can still cut it as a headliner, PLUS preview chats with Jake Bugg, Alt-J, Peace, Frank Turner, Deftones, Foals, Tame Impala, Swim Deep, Temples and Trent Reznor from Nine Inch Nails in an exclusive interview. ALSO win the chance for you and 4 friends to go to either Reading or Leeds as VIP and be side of stage for Jake Bugg’s performance.
Frank Ocean & King Krule!

One of last year’s most blogged-about musicians has teamed up with one of this year’s brightest rising stars for what’s sure to be a mouth-watering collaboration. Find out what’s brewing as Radar catches up with London’s singer-songwriter extraordinaire Archy Marshall (aka King Krule).

The Return Of Franz Ferdinand

The Glasgow band who first made waves with their self-titled debut album in 2004 play an intimate show in their birthplace of Glasgow to preview some new material. An album is on its way. Find out what the crowd make of it all.

The Child Of Lov In Most Revelatory Interview Ever

He revealed his face at the NME Awards 2013 last week and now it’s time to have the most in-depth sit down yet with Cole Williams. Did he always intend to keep his identity a secret? What does the name The Child Of Lov mean? How did he come across Damon Albarn and what was it like working with him? All questions are finally answered.

Earlier this year saw the release of “new” material from the legendary Jimi Hendrix. NME does some digging and speaks to the people around Hendrix at the time to unveil what went on during those studio sessions. Even Jimi’s daughter sheds light on the man at the heart of such a historic musical icon.

Beck As A Child

Beck speaks out about some of his favourite movies and possessions and tells NME that the first song he ever fell in love with was “Hot Child In The City”, even though he had no idea what it meant. We’ve all been there, dude.

NME.COM blogs contain the opinions of the individual writer and not necessarily those of NME magazine or NME.COM.