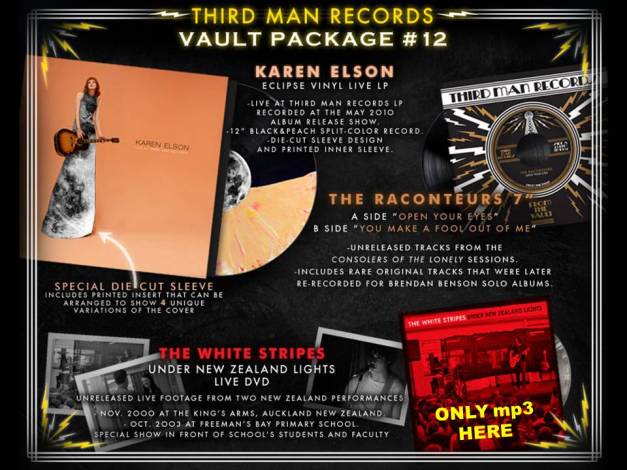 The White Stripes may be over but they’ve still got treats up their sleeves.

The hits just keep on rolling with the 12th installment of Third Man’s Vault subscription series.

The 7” for this shipment features previously unreleased recordings by the Raconteurs from their Consolers of the Lonely sessions. “Open Your Eyes” b/w “You Make a Fool Out of Me” are two songs that would later be re-recorded and repurposed for Brendan Benson solo albums. “Fool” would appear on Benson’s 2009 release My Old Familiar Friend while “Open” is featured on his upcoming album What Kind of World under the title “Here in the Deadlights.” The versions on the 7” are not outtakes, demos, b-sides or anything of a cast-off nature. Rather, they are songs that just did not find a spot on the LP.

“’Open Your Eyes’ sounds like a hit. Seems like it could’ve been released as a single and I can’t remember why it didn’t make the album” – Jack White

For the LP component we’ve dug into our literal vault and dusted off Karen Elson’s live performance from Third Man on May 24th, 2010. That evening we celebrated the release of Elson’s debut LP The Ghost Who Walks and backed by her crack band. What was captured was a truly ethereal, vibrant recording that breathes a life into the songs that is wholly different from their studio versions.

Paired with the elegant recording of Karen Elson is an interactive record sleeve. The front cover depicts Elson in a field of peach with the striking image of her dress is die-cut. Coupled with a specially designed inner-sleeve, the listener can effectively play “dress-up” with four different looks for Elson, depending on the orientation of the sleeve. If that’s not enough, get rid of the sleeve completely and you can arrange the vinyl itself, pressed on split-color peach and black vinyl (or Eclipse Vinyl), to create a 100% unique dress design.

The bonus item for this Vault package is a DVD of the White Stripes titled Under New Zealand Lights. Made up of two different performances by the band on separate trips to the island nation, we find them performing at the King’s Arms in Auckland in November 2000. This is some of the earliest known footage of the White Stripes outside North America (it was their first international tour) and finds them confident and captivating before a unexpecting crowd.

Come October 2003 and the White Stripes were slightly more known but still in-front of a crowd they had to work considerably to win over. The audience was the student population of Freeman’s Bay Primary School. Jack and Meg provided a nice primer on American blues history and the kids seemed to enjoy themselves in this sweet, innocent performance that has been kept mostly under-wraps in the nine years since it took place.

4. Your Southern Can Is Mine

8. Dead Leaves And The Dirty Ground

10. I Just Don’t Know What To Do With Myself

14. The Big Three Killed My Baby

15. Look Me Over Closely

5. Grinnin’ In Your Face

6. We’re Going To Be Friends

11. The Children Sing A Song