The near-definitive version of an essential album

The Doors was the singer, songwriter, actor, sexy drunk  and  offender Jim Morrison,  plus three friends who restored  the order  with thier  music to the chaos he brought  with his words. These musicians  were  Ray Manzarek, Robby Krieger and John Densmore. Since 1967, when they recorded  for the first time until 1971, in which appeared his last album, was one of the most popular bands in American rock history , and the creators of a sound thousand times recovered on decades that followed, where the Doors found posthumous worship.

L.A. Woman appeared in 1971 and was hailed as his best album since  The Doors, 1967, wich with  so disturbing songs  such as Riders On The Storm became the last record. At  these  time Morrison had left the band  tired of being a rock star. He moved to Paris determined to be only a poet, where he died in July of that year.

Now, fans of iconic rock band  have for something special. L.A. Woman is being celebrated with a special two-CD release

The L.A. Woman 40th anniversary edition features a never-before-heard song, “She Smells So Nice,” which captures the band  joyfully barreling through a full-throttle original before segueing into the blues standard “Rock Me”. As the song closes, Morrison can be heard chanting, “Mr. Mojo Risin”- an anagram of his name that was made famous during the bridge of “L.A. Woman”. In addition to “She Smells So Nice”, the second disc of the L.A. Woman reissue includes eight never-before-heard versions of songs from the album. Alternate takes of “L.A. Woman,” “Love Her Madly” and “Riders On The Storm” offer a fresh view on this landmark album, which was the group’s sixth straight top 10 title. The studio chatter between the songs is a revelation, transporting listeners to The Doors’ Workshop: the West Hollywood rehearsal space where they recorded the album. One segment in particular captures a fascinating moment of inspiration when Morrison suggests they add the now-iconic thunderstorm sound effects to the beginning of “Riders On The Storm”.

The near-definitive version of an essential album, enjoy it… 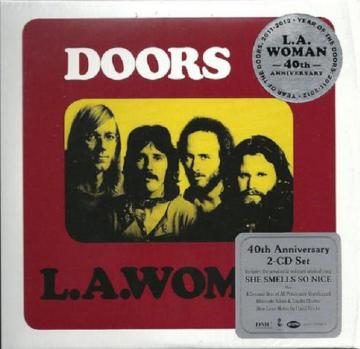 3. Been Down So Long

4. Cars Hiss By My Window

6. Been Down So Long (Alternate Version)

7. Riders On The Storm (Alternate Version)

8. She Smells So Nice

One comment on “The near-definitive version of an essential album”