Posted by pepearljam on 13 September, 2011
Posted in: magazine. Tagged: nme. Leave a comment 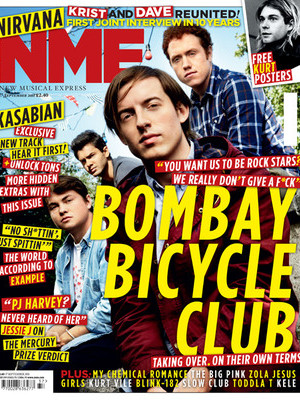 In this week’s NME…

Alex Turner talks “bullshit”. Jane’s Addiction are “insecure”. Selling your soul to the big time can “fuck off”. Having made the album of their lives strictly on their own terms, Bombay Bicycle have shaken up guitar music and are finally reaping the rewards. NME travelled across the UK and Europe with the band, finishing up at their triumphant Reading & Leeds shows, and discovering that it’s not bullshit and bravado that you need to breakthrough… it’s people power!

Plus, free for every reader, we’ve got extra exclusive hidden content, including an exclusive stream of the new Kasabian track, ‘Let’s Roll Just Like We Used To’, yours to listen to a whole week before anyone else, a special behind the scenes video with Bombay Bicycle Club, plus the chance to win on of five signed copies of their new record, and an epic retrospective on the coolestBeatle, George Harrison.

Also in this issue, Nirvana are back! For the first time in over a decade, and to celebrate the 20 year anniversary of Nevermind, Dave Grohl and Krist Novoselic come together for a joint interview. Joined by legendary producer Butch Vig, they tell us all about the original sessions, the way the record changed people lives, and what it was like to work with a certain man called Kurt.

As well as all that, PJ Harvey soaks up the Mercury Prize glory and tells NME that she wasn’t surprised to see England burning, Blink-182 stop scrapping for a sec and tell us about the new record, Zola Jesus heads to the fairground, but won’t go on the dodgems, and this week’s number one Example explains his strict toilet rules.

Plus the verdict on Kasabian’s epic new album, we catch Iceage and Cat’s Eyes live, Kurt Vile builds us a booze sandwich, plus the UK’s biggest and best gig guide.

Subscribe to NME here, or get this week’s digital issue for your iPad, laptop or home computer.