Posted by pepearljam on 12 July, 2011
Posted in: magazine. Tagged: nme. Leave a comment 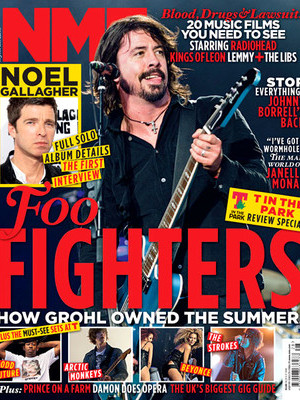 In this week’s NME…

The lord almighty swoops down on Scotland as NME’s Godlike Genius Dave Grohl and his Foo Fighter buddies lay claim to the summer at T In The Park with an epic headline set. It might have pissed down half the time, but that didn’t dampen the spirits of the 80,000 mental fans going nuts. “The sunshine follows us around at a festival!” Dave told us. “So if you want sunshine at a festival, just come see us!” Find out what went down, plus the full details on the best bands of the weekend (and what Arctic Monkeys think of idiots in fancy dress) inside.

Also in the issue, Noel Gallagher is back! In the first part of our world exclusive interview, the ex Oasis man talks about his debut solo album, his live plans, and a gobby young man called Liam. Welcome back, chief.

And Noel’s not the only returning hero… Razorlight are back too! Okay, actually it’s Johnny Borrell and a load of blokes you’ve never seen before, but hallelujah, the boy still knows how to give an interview. So where’s he been? Why did he fire the old band? And what was he thinking with that tache? JB reveals all.

As well as that, we run through the best and craziest music documentaries that you need to see right now, starring The Libs, Ozzy and Lil Wayne, Janelle Monae talks time travel and boozing with Einstein and Prince turns Hop Farm purple and sexy.

Plus all the week’s albums reviewed and rated, the essential gig guide and the best new bands you have to hear.

Subscribe to NME here, or get this week’s digital issue for your iPad, laptop or home computer.