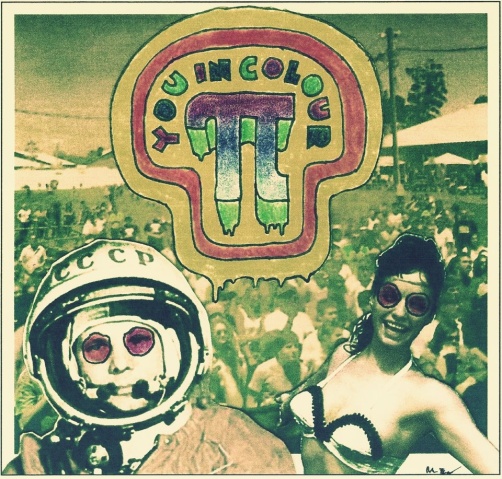 Sorry about  spotty the posting. Several factors are conspiring against  of this lately, such as  a lot of work , an hard disk damaged ( 1 TB  of music lost which I try fix  )  and occasionally trouble access to the internet.
It is a other fine example of Austin´s  lo-fi garage rock heavily influenced by surf and psychedelic themes that  by some reason reminds me of early times  Black Keys,  as nearest  the blues rock that I began listening to them for,  that came up with a rather witty title for their band, π  ( Pi)
All started about five years ago in a cramped room, when Sean and Trent on guitar and Brandon on drums covered Pearl Jam’s “Do the Evolution,so,  although  they was involved  in independent projects  , they continued to jam together and still talked about making something more permanent., which ocurred  on 2011 and was named Π , who early this year released demo You in Colour with the help of Mullings Audio.
π  has many of the things I like about bluesy rock like fancy guitar work, and  that   lovely sound of fuzzed out bass in abundance. Their music is lo-fi  garage blues rock, with fluxes back and forth between  psychedelic  and  surf  .
I must’ve listened to You In Color at least  five  times today. Hats off to ongakubaka  for posting this up and all the other amazing things on that blog .Top notch, fellas.
You can  help out  π  ,  going to one of their  shows or buying their demo at your own price. from bandcamp (It’s free, but  abound  reason for there   people  give  money to support the band )

The lightest and the whitest